Ryan Cartwright recently appeared on the new CBS series titled "Mom." He played an endearingly dorky husband hoping to adopt the baby of one of the lead characters. 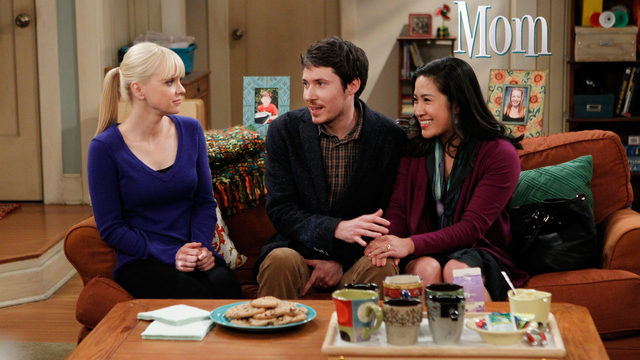 Though I can't embed the video here, you can watch the episode on CBS's website by clicking this link!

His moment on the show may be brief, but trust me: If you're a fan, you're going to want to watch.

Don't forget to https://twitter.com/cbs" target="_blank" rel="nofollow">tweet at CBS or post on its facebook and let them know you enjoyed seeing Ryan on their show. It may just get him guest stints on more CBS shows!

At Comic-Con International 2013 in San Diego, I had the opportunity to chat with Ryan Cartwright for a bit.

In this interview, he discusses his time on "Seriously Weird," "Alphas," and what it was like to die on "Bones." He also talks about a possible upcoming appearance on Syfy(!) as well as his own project he's working on with Zak Penn.

Check out the video here.

(This will also be added to our videos section)

My personal experience with meeting Ryan was truly a delight.He was at the convention with some other friends from the Syfy channel. A few others (and Ryan himself) were dressed up in costume for something they had decided to film at the convention. (I trust he will let us know when that is somewhere to be seen via his twitter). This added to the times he was stopped for photographs, for some people simply appreciated his Luigi costume.

He was very nice (even offered me his seat when no others were available), friendly and patient when my nerves made me forget my words. When other fans approached him, he gladly took pictures with them. I even witnessed him give and Alphas DVD to a sweet teacher of an autistic class. Also, he apologized for not being able to attend Comic-con last year, but it seems it may become more likely, now that he is living in Los Angeles. As I said, he was an absolute delight. He's also a very witty person, which makes me only look forward to his upcoming TV show even more. I am grateful for the opportunity to have met him, and encourage any of the rest of the fans to give him a hello if you see him.

In other news, I added photos from his twitter account to the photos page. Check them out!

Additions to the site: Comic-Con Phone Call and New Photos

It turned out that Ryan Cartwright was unable to attend Comic-Con. Still, he had a presence at the convention in the form of two phone calls that Azita Ghanizada made from the stage. Audio of these two phone call has been uploaded to youtube and can now be found on our videos page. A transcription should be coming soon.

Also, we've started a new album for Alphas season 2. It currently only contains two photos, but expect it to grow as the season progresses!

"Alphas" Season 2 Premiere and a visit to Comic-Con

The premiere of the 2nd season of Alphas is almost upon us!

Alphas will air Monday, July 23rd, at 10/9c, with its season premiere, "Wake Up Call." According to seriable.com, the premiered takes place 10 months after last season's finale. Naturally, there are a lot of changes within the group dynamics and for the individuals - some of whom may no be missing from the team.

In case you haven't seen it, here's the trailer for the 2nd season.

Prior to the premiere, the cast of Alphas will be coming to San Diego's Comic-Con International. According to the official site for the convention, the panel will be held on Saturday, 2-3PM in the Indigo Ballroom at the Hilton San Diego Bayfront. The description of the panel reads, "Alphas are among us...especially at Comic-Con. A panel featuring the stars of Syfy's Alphas discuss the show's exciting new season. Moderated by Geoff Boucher."

Syfy.com has a list of the planned panelists: David Straithairn, Azita Ghanizada, Malik Yoba, Warren Christie, Laura Mennel, and Ryan Cartwright. There are currently no reports on an autograph session, but attendees of the convention should have a delightful time at the panel alone.

Since our admin (yours truly) will be attending this convention, except a new Comic-Con photo album - and several videos - after the convention's end on Sunday.

There have been a few changes to the website.

The filmography page no longer exists. Instead, Ryan Cartwright's filmography will appear on the home page, underneath the welcome message. The filmography has also been updated to list all of the upcoming episodes of Alphas.

A new page has now emerged. This page is titled "Hardware Episodes," and has almost all of the episodes of this series that feature Ryan Cartwright. So if you have been curious to see this series, you need look no further than Unofficial Ryan Cartwright.

What do you think of the new site changes? Are there any more changes you wish to see?

ScifiPulse.net includes the first review of Syfy's new series, Alphas. They seem to have only nice things to say about Ryan:

"The alpha that I liked the most was Gary Bell, played by Ryan Cartwright, most recently from Fox’s Bones. Considered by many to be autistic, Bell can actually see and read sound and light in ways others can’t. He’s just so busy trying to follow it all that he has trouble sorting it all out all the time. Cartwright, who is British, has a great American accent, but his struggles to sort all this input out makes it tough to deal with his other alphas, among others."

Ryan Cartwright - along with Ian Steven Behr and Azita Ghanizada - did an interview for Starry Constellation Magazine. In this interview, Ryan talks about what attracted him to the series, what he believes Gary's journey is, and the sensitive nature of playing someone with autism. He also explains that he was the first one to be a part of the series, and how much he liked the script.

If you were hoping to see and hear more about Alphas, then you've got a lot to celebrate!

There's a pretty good bit of Ryan in this one, too! (It should have a lot, since it's 8 minutes).

So, what do you think? Does the series look good? Will you be watching when it begins in Monday, July 11th at 10 PM?

Thanks to Ryan Cartwright himself, we have discovered two brand new Alphas promos!

You can see the first promo here on SpoilerTV.

Ryan Cartwright: "I talk in this one!"

The second promo is much longer, and much more detailed. Though it features less of Gary talking, it does feature Ryan talking about his character.

You can see it here on Entertainment Weekly's site.

About this trailer, Ryan Cartwright said, "This trailer for Alphas will be shown in cinemas, CINEMAS! That's where *real* actors live!" So look for this trailer the next time you go to the movies!

Also thanks to SpoilerTV.com, we have a couple of new promotional photos for Alphas! You can see them here in our Alphas photo album.

After last night's emotional Bones episode, Ryan Cartwright did an interview for Entertainment Weekly's website. (NOTE: If you haven't yet watched the episode, spoilers are ahead)

In the interview, he talks about the mood of everyone on set during his death scene ("It was just miserable."). He also talks about how he was surprised by the following his character received - though we weren't so surprised. He also describes his time on set as "a lot of giggles." His favorite scene echos this response:

"Oh, I saw the one the other day where I was confessing to Emily that I had told people we were in a relationship. That made me giggle. And any scene I had with John Francis Daly, because we sat there giggling like little school boys all day."

Sounds like he had a lot of fun on the set. We, Ryan Cartwright fans, will miss seeing Vincent Nigel-Murray on the show, and I'm sure the cast and crew will miss him on set.

The best part of his ending on the series? He definitely left his mark on the show. His emotional death may have ultimately lead to one of the biggest changes in Booth and Brennan's relationship. Needless to say, he will certainly keep the Bones fans talking.